Four months have passed since the Tucson Unified School District governing board voted to shut down its Mexican American Studies classes. Since then, seven books that were used in those courses have been removed from the classroom. It's those books that are now part of a new book club at the Pima County Public Library downtown.

About 20 people showed up for the first Mexican American Studies Book Club meeting May 16. Marissa Juarez started the club and “Pedagogy of the Oppressed” was the first book on the list.

“I wanted a safe place where we could come together to discuss and engage on the banned texts,” Juarez said. “And hopefully in reading them, we can understand the value they have to our youth, and we will understand why some people perceive them as a threat.” 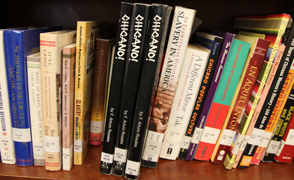 Juarez just finished her Ph.D. at the University of Arizona and is not affiliated with either TUSD or member of the group Save Ethnic Studies. She says the book club is a place where anyone can respectfully agree to disagree.

The diverse group included UA grad students, a librarian, a former TUSD student, a TUSD kindergarten teacher, community members and a woman running for a seat on the district’s governing board. Most of them said they joined the club because they were distraught after TUSD shut down its Mexican American Studies classes.

In early January TUSD’s governing board shut down the Mexican American Studies classes in fear of losing millions in state funding. The Arizona Department of Education ruled that the classed were in violation of a state law also known as HB2281.

Next meeting the club will discuss “Chicano! The History of the Mexican American Civil Rights Movement,” another book that was taken out of the classrooms at TUSD.

District officials have denied accusations of book banning and say more than 100 copies of the books are available at school libraries throughout the district.

Judge Upholds Law Banning Tucson's Mexican American Studies The Rogue Theatre presents "A White Heron". "Confessions of a Vintage YA Book Reader".
By posting comments, you agree to our
AZPM encourages comments, but comments that contain profanity, unrelated information, threats, libel, defamatory statements, obscenities, pornography or that violate the law are not allowed. Comments that promote commercial products or services are not allowed. Comments in violation of this policy will be removed. Continued posting of comments that violate this policy will result in the commenter being banned from the site.